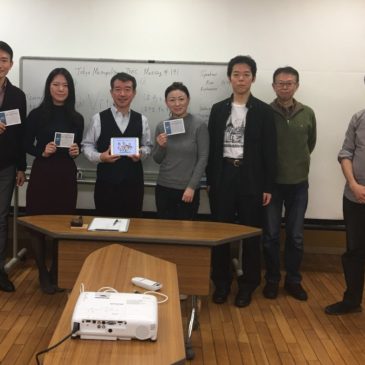 We had our 191th Meeting on December 23, 2017 at Kojimachi-Kuminkan. It was the final meeting in 2017, and also a very special one in a way that several new approaches were tried with success.
Eleven members attended the meeting with four guests giving fresh air into the relaxed atmosphere.
TM SW worked very hard taking the role for President and serving as TMOM.
-Word of the Day
TM SM introduced the words vital/vitalize(活性化する/活力を与える）which very much suited the energetic and lively meeting.
-Good & New
TM SM drew many vitalizing experiences from the members and the guests, reflecting Christmas and year end season.
-Prepared Speech Session
There was only one Japanese speech but with three evaluators commenting on the same speech.
1. 「磯野波平さんのリアル」 by TM TK (CC#10)
TM TK delivered another dramatic and enjoyable speech which led us understand the importance of designing so called multiple stage life instead of long followed three stage life to cope with rapidly aging society, by humorously citing the case of a national figure Namihei Isono. He overlapped the Namihei’s life with his, effectively making the issue very familiar and pressing. His message of shifting from recreation to re-creation in the later stage of our life was both impressive and motivating.
-Table Topics Session
Three Table Topics Masters challenged the members by each giving two questions, contesting the best Table Topics Master. All of the six Table Topic Speakers including the guests answered the questions very earnestly, and we enjoyed each answer very much.
TM HA, reflecting on this year, (1) Have you accomplished what you’d planned to do this year? How do you evaluate the result? (2) Who would you give your personal “person of the year”, and why? He/She can be either a public figure or your personal acquaintance or yourself.
TM TT, focusing on the national holiday, (3) If you’d add another national holiday, what holiday would you add? (4) If you’d abolish an existing holiday, what holiday would you abolish?
TM RY, today being the birthday of the emperor, (5) What was your worst birthday memories? (6) If the god would grant any of your wishes, what would you wish for?
– Intermission
TM SW treated us with Ebi Senbei of Ise. It tasted very good!
– Evaluation session
Three evaluators evaluated TM TK’s speech with different angles.
1. TM AI suggested a structural change for better effect. 2. TM GS wanted to hear more on financial part. 3. TM MF hoped to listen to the speaker’s own re-creation.
– General Evaluation by the speaker
Today’s evaluation was done in a different manner such that the speaker himself commented on each evaluator from the speaker’s view point. This approach was very interesting to me.
-General Evaluation by All Members
TM SW prepared a link to the General Evaluation page which can be accessed with cell phones, letting all the participants to evaluate today’s meeting.
– Winners!
Best Table Topic Speaker: Guest MI Best Table Topic Master : TM TT Best Evaluator : TM AI
– Announcements
TM YT announced that he had decided to quit this club due to his shift in the new job and that today was the last attendance. We all miss his cheerful and proactive attitude.
(Written by H.A)