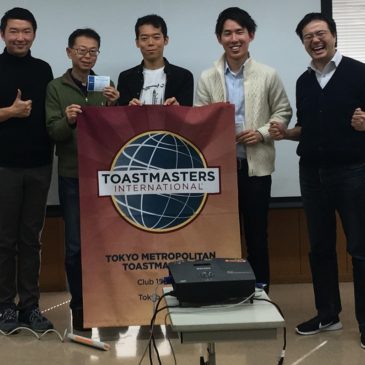 Our 189th Meeting was held on November 25, 2017 at Fujimi-Kuminkan.
It was a small sized meeting with only 11 members and no guest speaker attended.
Today’s TMOM was TM RY. It was the first time for him to take a role of TMOM but it started smoothly though he was a little nervous only at the beginning.
◆Word of the day
Today’s Word of the day was announced by TM SW as “Energize” in English and “激励する” in Japanese. The word selection was perfectly fit for the current season because we would like to ENERGIZE absent members to come to the meeting.
◆Good & New
TM RY started Good&New and he said he was lucky because holiday gave him a time to prepare for the session. Five other members talked about his or her good and new stories and the meeting is getting to be warmed up.
◆News of the week
TM MT asked if Japan is a safe country or not. We tend to think that Japan is not safe because TV shows many cruel crimes and tragedies every day. According to the white paper of crimes, crime rate decreases in number and Japan seems to be a safe country. She insisted that it is important for us to get the facts and to be careful not to be manipulated by media.
◆Prepared speech
There were three speeches, one English speech and two Japanese speeches though it was an English session.
1. The power of feedback, by TM SW (#CC3)
TM SW delivered the importance of feedback at the Toastmasters activities. He recommended members to review the evaluators’ feedback and commens on comment sheets. He scanned his paper comments by Adobe Docs and reviewed them any time he wanted. Comments are treasures in order to improve your speaking skills.
2. チャンツィイー / Zhang Ziyi, by TM SH (#CC8)
TM SH talked about the famous Chinese actress Zhang Ziyi in Japanese. She was ambitious to be on the top position and made efforts to keep it. He used visual aids such as her pictures and movies effectively so that the audience can easily followed his speech.
3. センス入門 / Introduction to Sense TM KT (#AC2)
TM KT talked about the “sense.” He cited from the book “Introduction to Sense” that the “sense” can be defined as a power of selection. He struggled in making friends when he was young and he showed his story of aquiring the sense of making friends. He concluded that we could learn the “sense.”
We had ten minutes intermission after the prepared speeches. TM YT served cookies as a snack master and we also enjoyed chocolates that President MG brought from Italy as souvenirs.
◆Table Topics Session
TM SK stared Table Topics after the intermission. He selected “Work style” as a theme of Table Topics and picked up five questions.
Q1. Do you want to work at home or not? Please give us the reason why. (TM RY)
Q2. Whch working system do you prefer, paid by hours or paid by performances? (TM YT)
Q3. What kind of support do you think are helpful for women to work full time? (TM MT)
Q4. Do you think that companies should allow their emplyees to work at different companies? (TM SW)
Q5. How do you work if you are told to be more innovative and creative? (TM TT)
All questions are controversial but all speakers were willing to deliver their ideas clearly.
We enjoyed Table Topics Session very much since we have not had Table Topics these days.
◆Evaluation Session
Evaluation Session was performed by TM YT as a General Evaluator.
Today’s evaluators for the prepared speeches were TM HA, TM YS and TM GS.
All evaluators pointed out the good points and issues to be improved clearly and gave the speakers good advices.
=======Awards of the meeting=======
*Best Speaker: TM KT
*Best Evaluator: TM HA
*Best Table Topics: TM MT
◆Announcement
VPE announced that easySpeak will be introduced to check the attendance of the meeting from December. Please see the e-mail message in detail.
This minutes was written by TM SK.