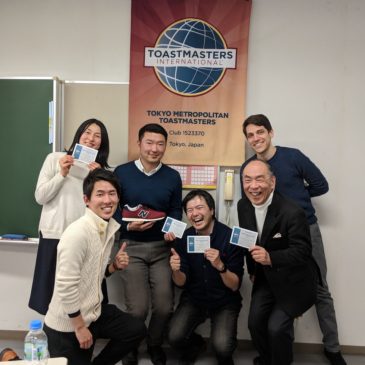 Our 195th Meeting was held on February 24, 2018 at Kudan Lifelong Learning Hall.

Today‘s TMOM was TM KT.
Today‘s Word of the Day was announced by TM RY as “touching” in English and “kandou Saseru” in Japanese. He came up with the word when he was watching the PyeongChang Olympic on TV and moved with the athletes’ achievement.

As the “News of the Week”, TM TT talked about “PyeongChang Olympic 2018”. What he liked about was human connection and friendship built between athletes beyond the borders. And, it made him remind again the importance of our club’s activities with Toastmasters Clubs in Korea. He introduced to us the Japan-Korea Joint Meeting to be held in Tokyo soon. It will be a great opportunity to enjoy and build friendship with the Toastmasters members in Korea.

There were 2 prepared speeches.
First speech was made by TM GM with the title “Hadaka no Oosama”. It was a story telling of an old story “Hadaka no Oosama”, which was different from the usual speech. He made it enjoyable by using effective gestures, body languages, and voice varieties.

Table Topics Session was conducted by TM MT.
The topics was the PyeonChnag Olympic. Assumed that she was an interviewer and the participants were a real athlete, her coach, brother, rival and best friend, she asked them about how they feel. The theme was timely fit, and it was interesting.