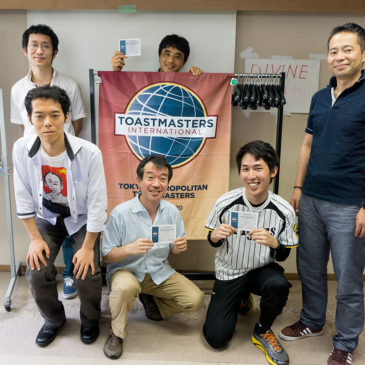 We had a 155th meeting on July 23th at the Kandakouen kuminkan with 19 club members and 4 guests.

TM Jaxx lives in Korea. He came our meeting during stayed in Japan. We surprised that he come in the room. He told
us what “Our club is most famous group in Korea.”

TMOM was conducted by TM Itxx We don’t concern about his TMOM role, she prepared very well and facilitated the meeting very smoothly.
Time management was also great.

TM Toxx showed the word of the day, “Divine” or ”神”
TM Maxx conducted “Good & New”. He gave members that speak up during 24 hours or one week “Good & New”.
TM Taxx presented  “News of the Week” about Turkey. His “News of the Week” was well prepared. Turkey pulled a coup last
week. He told us Turkey’s history from long time ago. Turkey have been war with around the countries.The coup is not
the first time. There is statue of coup’s hero in Turkey.

1st: TM Masxx gave us a very inspired speech with the title of “船長手帳を知っていますか” This speech is the first time he join our club. We haven’t know the book.
He went to around the world at young age. It’s good his experiences in his life.
2nd: TM Yasxx he addressed about and title “Reduce, Reuse, Recycle”  We have to rethink the three words and do it in our life.
3rd: TM Takxx addressed for his speech life.  The title of speech is “Huh? to Aha!” His friends invited him something, but he wasn’t interested them
. He answered Huh? to Aha! He obsessed about speeches in his college life.
4th: TM Ishxx The speech of title“Four decade”. He separate his life by decade. First about his family Second his student of life in high school.
Third study abroad in college in Hawaii. Fourth he worked in Taiwan.

During ”Intermission”, members and guests enjoyed chatting with sweets from U.K. from Miyxx.

“Table Topics” session was conducted by TM Murxx. She asked some questions about Olympics.

In the guest comments, some guests mentioned our club is good because the meetings are held in
the morning. Each guests told that they are interested in our club. A person declared to join
our club.

This minutes was written by G.S.